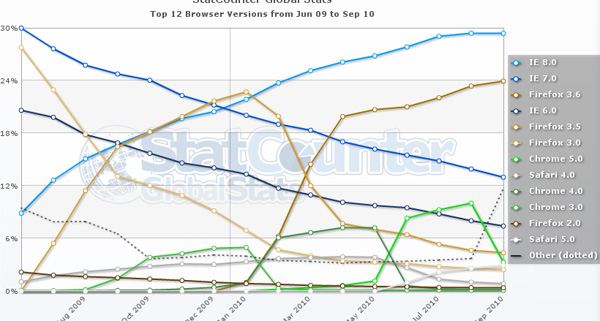 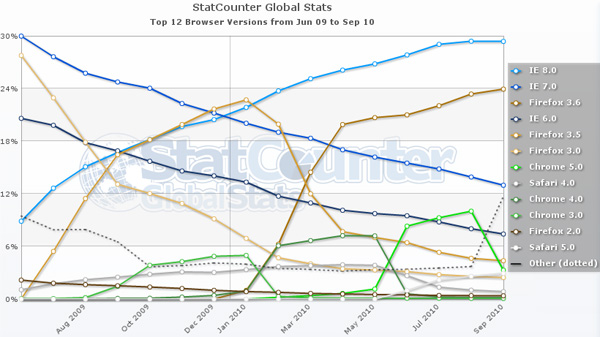 Although not the most exciting topic, analysis of browser usage isn’t purely academic, it is not only important to web designers and developers, who have to ensure their websites work for as many people as possible. The trends make a big difference to how everybody uses the web. Changes in browser technologies to embrace emerging technologies mean that to make the most of the web that older, legacy browsers need to be abandoned.

It can be a “chicken or the egg” situation, web designers can’t use new technologies until most browsers can support them, and users often won’t update unless there is functionality they are missing out on, due to having an old browser, HTML5 being a good example. 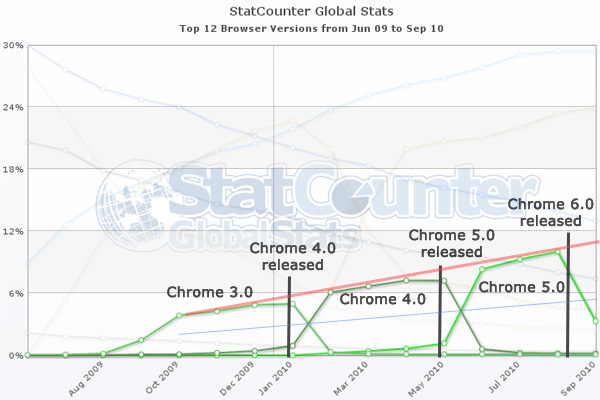 With each new version almost all users are updated within a month. Google Chrome automatically downloads and installs updates if they are available, a feature which is rather hard to turn off. This does have the advantage that users of Google Chrome will always be using the most up-to-date version of the browser available, with bugs and security holes constantly fixed. It will also mean that the user will have the richest web experience available to them; if Google Chrome provides the feature they will have access to it.

Interesting in this trend is version inflection, whereby the relationship between the new version and outgoing version is almost a mirror image, reflected in the plane between the axis and the total browser usage trend (see light blue line).

The overall trend (pink line) is that Google Chrome is increasing its user base at a steady rate, with usage more than doubling in less than a year (3.86% Oct 2009 – 10.02% Aug 2010). Unsurprising considering Google has access to 91.4 % of the search engine users and a unique market position to get its browser to people. 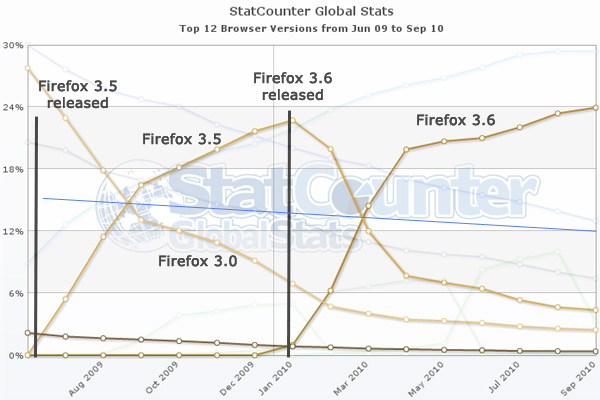 Firefox has longer release cycles, often with minor revisions between major releases (3.5.13, 3.6.10). Updates are not automatic, although the user is prompted to update, either by updating directly in-browser, or by being linked to download a new version, as happened with 3.5. This means uptake of new versions is slower, taking 3 or 4 months for usage to surpass that of the previous version.

The overall trend for Firefox is that the browser is gaining no ground, with uptake pretty much level. 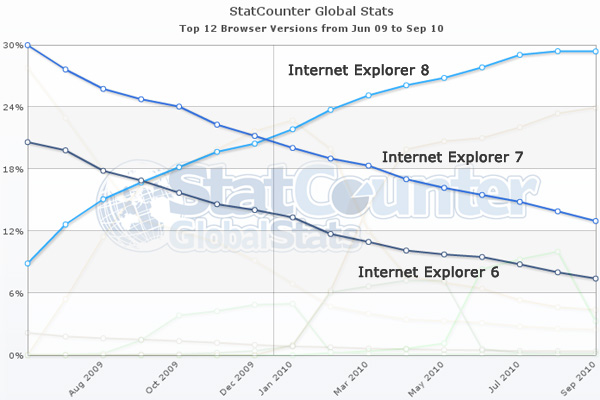 By comparison Internet Explorer (IE) release cycles are practically glacial. Internet Explorer 6, the lowest version number still with significant usage, was released in August 2001, with IE 7 released over 5 years later (October 2006), and, the current most popular, IE 8 some 2.5 years after that (March 2009).

While it has often been pointed out that IE 6 just won’t die, due mainly to its use by so many large businesses and public sector organisations, it is quite remarkable, and frustrating, that IE 6 still has such high usage after 9 years! The main problem here is that with so long between IE 6 and IE 7 (5 years), and one of the biggest uptakes in business usage of computers, that a lot of intranet websites were built to be viewed through IE 6. This in addition to the fact that IE 6 is not standards compliant means that any update to a browser that would display these systems ‘properly’ would in fact break the pages. In addition to IT departments simply not wanting to take on the risk, and headaches, of upgrading browsers across large networks. With Microsoft continuing support for IE 6 until April 8 2014, it’s not going to go away for some time yet.

Internet Explorer’s version inflection seems to indicate direct replacement of IE 7 for IE 8. Internet Explorer 6 abandonment doesn’t seem to play a large part in the rise of IE 8, suggesting that those users are moving to other browsers, perhaps due to running pirated version of Windows XP, preventing them from updating to IE7 or 8. These users would instead move to Google Chrome, Firefox or Safari for Windows.

Although IE 6 and 7 are (slowly) on their way out, being largely replaced by IE, it would seem that a significant part of users of IE are defecting to Google Chrome and Safari, the latter’s rise being related to the uptake of iPhones, iTouches and iPads, which all use a version of the Safari web browser.

Overall Firefox usage has levelled out, hovering around 30% of all browsers. It would seem that this has come about with the appearance of Google Chrome on the scene. Firefox users have traditionally been a more tech savvy group, who’s defection from security-flaw ridden Internet Explorer fueled Firefox’s rise until mid-2008 with Google Chrome’s release. These users will be more aware of the advantages of lightweight, and fast, Chrome, and feel less emotionally invested in any browser in particular.

The abandonment of Internet Explorer for Chrome isn’t surprising, a large number of these users will be less computer savvy, one reason they have stayed with IE up until now. With the ‘buzz’ about a browser from big name Google, as well as Google’s unique market position, which provides a way of leveraging the comes-installed IE browser off the default browser spot on Windows computers.

Disclaimer 1: I am a Firefox user, in large part due to its invaluable developer tools and add-ons, in addition to being one of the best browsers for my operating system, Ubuntu Linux. I am also, inherent in being a web designer/developer, an opponent of Internet Explorer.

Disclaimer 2: Browser usage, or indeed any web usage stats, are by no means precise. They will vary based on audience (Wired.com vs. The National Trust), geographical region (country to country, or even region of the same country), and time of day (work vs. home computer). In addition some browser will ‘spoof’ their user agent and report to be something which they are not. 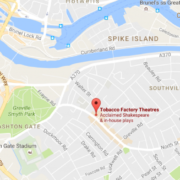 We have moved…
0 replies

Resistance is futile – how the Social Media revolution overthrew your web...
Scroll to top