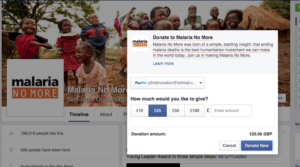 For the last two years, Facebook has allowed a small number of charity partners to collect donations directly through their pages. Now the are rolling the service out to all non-profits – but not fully.

Charities will be able to add a Facebook-native Donate Now button to their page – however, unlike the partner programme charities, you won’t be able to directly donate to the charity through Facebook.

The button is more of a call-to-action, taking users off to the charity’s own donation platform. It’s believed this has been done by Facebook to avoid accusations that it is endorsing donations to unpopular or controversial causes.

Despite this, the feature may still be helpful in driving users to donate, as up until now having a static, permanent and clear call to action to donate on your Facebook page has been a bit of a challenge.

The idea of sending users away from Facebook to continue their engagement with an organisation goes against a lot of what Facebook has been trying to do recently in terms of making Pages the core of user interaction with an organisation. So it will be interesting to see how the button develops and if Facebook extends full integration to all sometime in the future.