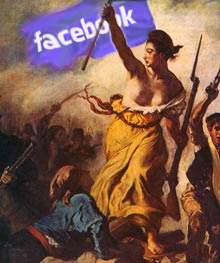 The world’s biggest annual social media survey has just been published, and it shows that, for charities, the tipping point in the communication revolution has now been reached.

Among the figures the Wave survey – published by ad agency Universal McCann* – throws up are these:

It’s the end of the WWWorld as we know it

What do these figures mean? Along with all the other figures showing the sheer scale of social media engagement, they mean that your website has stopped being the centre of your online world.

For most charities and businesses, their web presence has been defined by their website. It’s where the “brand” lives online, how they communicate online, where they point people to for information – it’s the “official” web presence of the charity.

All that is about to change – in fact, it already has. The web is no longer about sites, its about content. Content doesn’t live on a site, it lives online – in social media, in tweets, on Facebook, emailed between friends, mentioned, social bookmarked.

It is no longer enough to concentrate your online marketing around your website, with perhaps a cursory nod to Twitter or Facebook. Your charity no longer exists online as a destination, but as a conversation.

Social Media is becoming the first place that people will find you online. It’s becoming the place where they will donate, fundraise, discuss you, support you, engage with you.

Increasingly, they’ll stop searching for you online, and instead you – and the issues that matter to your charity – will find them.

All this is breaking down the walls that kept content – and brand – tied to a single website.

Social Media is no longer an add-on, or an option, or a means of driving traffic to your site. It is your site – it’s everyone’s site.

When you are thinking about your website you now need to think of your web presence – the way you engage online is changing, and so must the roles of the people in your organisation that support your website.

Just like you did for your website, you need a strategy for social media engagement that directly supports your organisation’s aims. You need measurable goals, and people to ensure that those goals are met. As much as anything, you need a change of mindset away from having a website manager or team and towards having an online engagement team.

Because these cookies are strictly necessary to deliver the website, refusing them will have impact how our site functions. You always can block or delete cookies by changing your browser settings and force blocking all cookies on this website. But this will always prompt you to accept/refuse cookies when revisiting our site.